Back to all publications

Executors have a number of duties:

Executors have limits on their powers over and above the Will:

If you are the spouse, relative or close friend of a person making a Will, there is a good chance you will be appointed an executor, and possibly be named as a beneficiary under the Will.  Should that occur you will have two roles.  This can become difficult to manage when someone is challenging a Will such as a through a Family Protection Act claim (see Daniel Shore’s article Family Protection Act 1955 and the Concept of Moral Duty).  An executor has a duty to the Estate, whereas a beneficiary has a right to receive from the Estate.  In a Court proceeding, arbitration or mediation, an executor/beneficiary may have to switch between “hats”:

The key distinction between the roles is that an executor will normally remain neutral (particularly if there are competing claims) and a beneficiary is an active participant.  The two roles interact simultaneously, but separate legal advice must be obtained for each role:

The following diagram summarises the two roles and how they interact in a Family Protection Act claim when a claim is brought and opposed by another party: 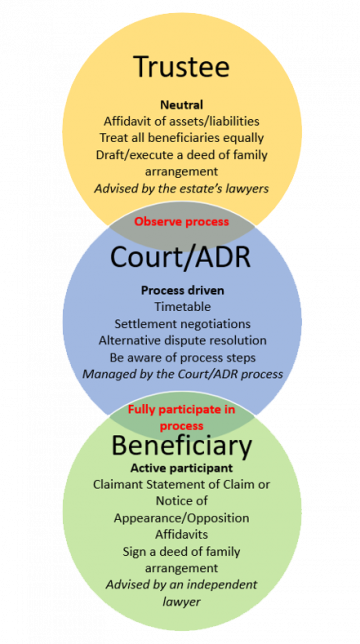 Ewen is a Senior Solicitor in our Dispute Resolution Team and can be contacted on 07 958 7466.


Back to all publications
Ewen Macpherson
Senior Solicitor
View profile